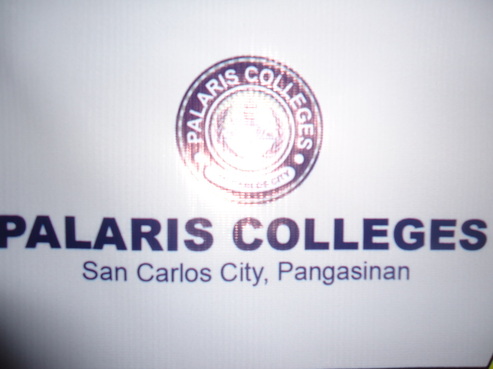 The year 1946 marked the appearance of the pioneer private school in the educational firm anent  of San Carlos College for it was in this very year when the golden dream of the Carleñans  in establishing an efficient private institution of learning was realized.  The herculean efforts  behind so noble a venture rested upon the shoulders  of fifteen civic-spirited  citizens, namely: Prof. Nemesio R. Ceralde, Mr. Ricardo Magleo, Dr.Francisco Untalan, Judge Juan A. Benetiz , Judge Enrique P. Resultan, Dr. Blas F. Rayos,  Dr. Antonio G. Sanchez, Dr. Arturo B. Soriano, Mr. Amado L. Alyson and others.

The institution was called Palaris Academy after therenowed hero of Binalatongan (now San Carlos City), Pantaleon Perez alias "Juan dela Cruz Palaris".  The school was founded on the principles of citizenship, character and scholarship and its efforts were directed to the realization of the objectives of education as embodied in the Constitution of the Philippines.

The incorporation papers were approved on July 1, 1946. The Palaris  Academy opened with 237 students  with only seven instructors including the Director. It was first housed in a big dilapidated building  at the corner of Plaza Liberal and Palaris Avenue. After a lapse of several months, the school  was granted its recognition,making it the first recognized private school in this town at that time.  It graduated nineteen students in the same year  and this first batch of graduates are now successful professionals.

In the succeeding school years, the enrolment swelled considerably  thus creating a necessity for the administration to augment its faculty.  The school improved its facitlities  because it has gained the confidence of the public and it couldnot fail its patrons in their expectations. The Board of Trustees  conscious of its duties responded to the needs of the students populace for a higher education thus leading to the creation  of the College Department by offering the two-year Junior Normal,  Liberal Arts, and Education Courses.  Responding to the incessant clamor and demand of the public and the community it established the Basista High School in barrio Basista which is now a municipality.  The founding of this school was also in consonance with the rural development program of the government.

In the school year 1949-1950, the Palaris Academy was well ahead on the road of progress. Due to to the creation of the College Department, a change in name was affected.  The Palaris Academy to Palaris Junior College.  To accomodate  the ever growing populace, the school was housed in a new building situtated in Palaris Avenue.

The year 1963 marked a new era in school administration when Atty. Juan T. Baun, manager founder  of the famous Kaluyagan Rural Bank  in this town assumed the Presidency of the college. The present day financial status of the College is all due to his wise management and guidance that his presence is felt as indeed of Atty. Juan T. Baun as the adminstrator.  Mrs. Amparo S.Baun as the brain, and Mrs. Agripina C. N. Abar as the dean of instruction, the schol has gained eminence and is  expected to go far. Bold moves have started and it began with the acquisition of new books to augment those that are in the library, purchase of adequate laboratory  apparatuses, and a new building is in the offing to accommodate the ever-growing  student populace. These tangible achievements are but a prelude to what is being stored in the future for Palaris Colleges.

Thus came into existence this institution of learning, the Palaris Colleges which is often dubbed the "School of the Carleñans".  Starting from a modest and humble beginning it has risen to one of the most prominent and distinctive school of Pangasinan. As we turn back the hands of time, nineteen years ago, we will note with pride its endless caravan of graduate who are now worthy  leaders in their chosen fiield of endavor.  Ever cognizant of the axiomatic fact that just as a tree is known by its fruits, so a school is known by its products.  We could simply that our very own PALARIS COLLEGES   is not behind  in its march to earn a place under the sun.

Palaris Colleges and the Man behind it ...

Palaris College was once .. and should have been written off as a school that glorified in its past and died.

Yet it did not die as gloating predictors of inevitable doom had anticipated.

There is a "new look" affected in this school but a man who believe that a prestigious institution of learning cannot just fade away  into oblivion simply because of  nonchalance and a deceiving   atmosphere of false security.

A school is as good as the ones who manage it.  Above all, it must maintain its status as a fountainhead of knowledge and skills for dynamic citizenship for those who enter its portals.

That was Palaris Colleges until it lapsed into a lethargy, complacent and comforted by the thought  that it could lurch on. It lurched on indeed but it was dying.

But then a man could not take it for he was trained and schooled in sound management and is not new in school administration for in fact he founded the first private school in the locality known as the San Carlos Academy with more than 300 pupils scattered in the different barrios of San Carlos and Urbiztondo.  This academy saved substantially the exodus of school population in the mid-thirties in the public schools but which stopped  its operation due to the interruption of the second world war.  But just  as education is a continuous process, it stands to reason that this man found the continuation of his educational endeavors in the present Palaris Colleges.

Misunderstood, commented against by eccentric fellows, he goes on his way with the coolness and precision characteristics of hard boiled successful entrepreneurs, who believing in a good cause will stick out their reputations.


Ina short time that he has taken over the management of the school sweeping and bold changes have been made to put back the Palaris Colleges on its feet and restore its lustrous fabric of prestige for the protection of its alumni, for the pride of its students and for the benefit of the community of our beloved San Carlos City.

It is too early to make a forecast of how Palaris Colleges  will fare in the years to come.  But it is safe bet that with a man like ATTY. JUAN T. BAUN steering the wheel, the Palaris Colleges will weather the storm  to fulfill its avowed mission of giving the best in molding future citizens for active and dynamic participation's in the affairs of everyday life.